Most of this Article was written and published on February 19, 1991, in the Ottawa Citizen National Newspaper in Canada's Capital.  In an unexpected way, the Lord used it to start the Ottawa Messianic Fellowship, a congregation with Jews and non-Jews worshipping the God of Israel together.  After the Gulf War began, I was asked, so many times, about the situation in the Middle East and about my family.  It was heart-warming and an encouragement to me to see so many people praying for my loved ones in Israel.  I could not say enough 'thank you's.'

It was very difficult to relate what I was experiencing in short discussions and when the pastor asked me, I shared the following in the church service:

In the last three weeks I watched Baghdad, my birthplace, being destroyed.  Memories long stored away came back alive.  Baghdad - the jasmine, the roses, flowers abundant, the fragrance in the air.  The birds singing their lullaby in vigour at sunset, nesting in the trees for the night.  The Tigris next door and the fresh fish, the taste of rich food:  the love of my family who were close and all around me; the peace of the Sabbath...  Oh the beautiful days of my childhood.

But I also remembered horror stories about Jewish massacre throughout the centuries, including Rashid Ali who marched into Baghdad in 1941, killing Jews left and right.  Although many Jews on the street where I lived were killed, miraculously, I was not among them.  More personally, I remembered the children who spat at me and called me a dirty Jew...  I was too young and innocent to comprehend then, and followed my parents’ instruction to always leave the scene.  The revenge is the Lord's, I was taught.

Then I remembered 1950, two years after the United Nations' declared Israel a state.  The Iraqi government allowed us to go to Israel, on the condition we leave everything behind.  I still marvel at how our well to do community chose to get up and leave Iraq with absolutely nothing, especially when they were established there for almost 2,500 years.  They were like an antenna picking up the silent voice of God to return to the land.  Doctors, lawyers, bankers went to Israel to dig ditches, pave roads and collect garbage.  The Iraqi government took our houses, froze our money in the banks so we could not draw on it. And if that was not enough, in the airport they took most of the clothes from our suit cases, and our watches and jewellery off our bodies just before we left.  They claimed it was to be given to the Palestinians, who fled Israel in the time of war.

In Israel we were put in black tents, with stretchers for beds, with outhouses, outdoor facilities, and stamps to collect cooked food.  Something we were not used to.  The conditions were unbearable but thanks be to God, and to all those from all over the world who shared whatever they could to build the land, and help integrate us.  These are some of my memories.

Since the war started, I watched my family being bombed in Israel, scud missiles and more scud missiles. If the Lord didn't help me I could have gone crazy.  Somewhere in the deep of my being, I saw my family taken away to Babylon, more than 2,000 years ago, by Nebuchadnezzar.  I could hear their cry then mingled with their cry now.

I believe that at the time God wanted to discipline Israel but it is also written in Zechariah 1:14-15  "So the angel who talked with me said to me, 'Cry out, Thus says the Lord of hosts: "I am exceedingly jealous for Jerusalem and for Zion.  And I am exceedingly angry with the nations who are at ease; for while I was angry but a little, they overly furthered the evil.”

Throughout history, God has used certain nations to discipline other nations but He will contend with those nations who use excessive power in needlessly destructive ways, whether they be Americans, Israelis or Iraqis.

I heard so much about Islam lately and wondered if it is the source of the trouble.  But who really attacked the children of Israel previously?  Wasn’t it Nebuchadnezzar?  He worshipped idles and himself.  Wasn’t it Hitler and all those who were before him?   They worshipped power, wealth and pride.  And now Saddam Hussein justifies his attacks on Israel by claiming to help the Palestinians.  Yet, in fact, Hitler hated the Jewish people before they had a land in their possession. Iraq has been opposed to Israel's existence before they were a nation with an army of their own, when there was no land to dispute and no one even heard of the Palestinians.

Are the Jews attacked because they are more sinful than anyone else?  Or maybe they have something others don't have?  Well, the only thing I can think of is that they have the first promises of God's salvation.  Since the Lord started with Abraham, they have been the chosen line.  And usually God's favour toward one incurs jealousy and strife in others.  From Cain's killing of Abel, (Gen. 4: 8), to Ishmael mocking Sarah (Gen. 21: 9), to Jacob's sons envying and hating Joseph, and so on and so on... but the Lord blesses and protects those whom He chooses.  He also stands on the side of those who seek Him everywhere.

In Canada, the authorities were checking the Iraqi-born for security reasons.  I thought they may call me. Then I asked myself where I stand?  Do I stand with the Iraqis, the Israelis, with the allies, or with the peace marchers?  I also wondered where my loyalty lies.  Does it lie with the church or the synagogue?

Lord Jesus, please help me!  Our world is too divided.  Is God Muslim?  Christian?  Is He a Hindu or Buddhist, Sikh or Shinto?  Or is He a Jew?   God is none of these; He is the creator of all beings.  He said to love one another, be kind and charitable, and worship Him in spirit and in truth.  Therefore my choice is to put my loyalty in Him, with what concerns the creator of Heaven and earth, The God of Host אדוני צבאות, and Messiah משיח the Christ, and His Angels.  My loyalty lies with God's seekers, wherever they may be, whether they are still in kindergarten or whether they know a lot about Him.  My loyalty lies with those who seek Him in honour and truth, not those who follow the god of their imagination.  I would like to be obedient to Him as all His creation, heaven and earth obey Him, and wish to direct everyone to Him.

When I was small, my parents taught me a parable, ironically enough in the Arabic language.  It says: "He who digs a ditch for his brother, he will fall in it."   I saw on television, women and children screaming "we want to drink the blood of the Americans."  It makes no difference if they were psyched up to it; the result is the same.  Now their blood is being shed.  For years, various countries supplied weapons to Iraq; it doesn't matter why.  Now these weapons are pointed towards them.  It is like the gravity.  God's laws will never return empty.  Let us not say or do anything that we do not want our children to experience, because God will discipline us and in the process we will lose.

I saw Saddam Hussein in one of his appearances sitting with his chief commanders.  He looked grim and lacking counsel.  I should hate him; but a flow of unexplainable love swept through me.  I wanted to touch him and heal him if I could; I felt like embracing him.  He is surely sitting in the same boat I sat in before submitting my life to the Lord.  It rocked and rocked until it hit bottom.  Thank God for that spirit who called on Him from deep within me, and when I finally held on His hands, He saved me from the deep just as He did with Jonah.  I wish that for Saddam and for all human kind, for I can't praise the Lord enough for opening my eyes to see His Glory, taught me to respect Him and respect others.  He helped me to love, experience joy, faith and peace, and taught me to reach out to the needy.  May His praises always be on our lips, Amen.

The Lord gave me a vision one night.  Three figures stood facing each other.  A rabbi, a priest, and an imam.  With head bowed toward each other and arms hugging each other’s shoulder they worshipped God together.  I HAVE SEEN IT, AND I AM CONFIDENT THAT THE LORD WILL BRING IT ABOUT ONE DAY, because God created us to live with Him, according to the laws of His creation, physically and spiritually, and to share His nature and to love one another, amen. 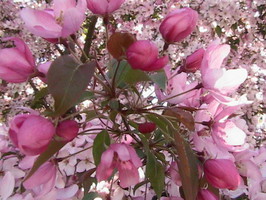 Isaiah 49:5,6  "And now says Jehovah that formed me from the womb to be His servant, to bring Jacob back to Him and to gather Israel unto Him, for I am honorable in the eyes of Jehovah, and my God is become my strength;   And He said , it is too light a thing that you should be my servant to raise up the tribes of Jacob, and to restore the preserved of Israel: I will also give you for a light to the Nations, that you may be my salvation unto the end of the earth."

Because of Yeshua (Jesus), there is Torah (the word of God), in every church in the Nations, with the message of salvation all over the world!

He is the one who will bring Jacob back to God (as He did to me), and will gather the outcast of Israel.